Posted Apr 7th 2006 8:30AM by Adams Briscoe
Filed under: Videos and Screenshots, Downloads 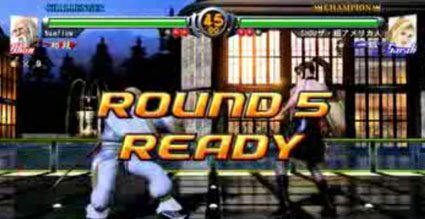 The verdict is in and the decision is unanimous: Virtua Fighter 5 looks like one hell of fun game. It doesn't take a critic to figure that one out. Just download the video footage and see for yourself! Keep in mind this is actually from the arcade version, but PS3-owners-to-be will see it ported to the Sony console later on down the road. Limber up your opposables, it'll be here before you know it.

1. There are people out there that still play these fighting games? I like to play the old Street Fighter every now and then but cmon. These games were 90's things.

2. How sad... the deepest, most cognitive fighting series on the planet is a "90's thing"... No wonder I like living in the past so much.

3. VF5 doesn't look really next-gen.. and everyone should know that you should NEVER judge a fighting game by it's graphics

4. I think the graphics look great, and I give respect to the VF series...that said though, I am oddly completely disappointed by the physics. I know this is an arcade style game but...it just bugs me, and here's why.

With all the talk lately about how far the CELL is suppose to drive physics along and PS3's HAVOK middleware and Ageia's new support for our multithreaded next gen game consoles and Ageia's PPU's for PC's--I am shocked to see that fighters react exactly the same as they have in the past. I mean sure, I see some hair moving, the cloth moving is very cool, and player movements are more fluid. But player contact (ie landed punches/kicks/grapples) show no sign (to me) of advancement from PS2 fighters.

I'm no physics expert or anything, but if I kick a guy in the head while he is lying in a supine position, his head should move a lot, and his upper torso should move a little, but his lower torso should remain relatively stationary---and if his lower torso does move from the impact, his body will be contorted into a different position than before I kicked him in the head.
Looking at this video I still see body reactions from the PS2 days. In PS1/PS2 fighters if you kicked a guy in the head while he was down, 1)his head would go up 2)his mostly un-contorted body would raise up off the ground a little 3) his body would land in the same position as it was before the kick, only now its a couple feet away from the player who kicked him 4) the fighter would react in pain throughout the sequence.
I'm ready to see HAVOK physics in my next gen fighters. Needless to say some of the rules of physics should be bent to make it a fun arcade game,(I mean c'mon, its fun to see a little girl kick an old guy 10ft in the air) but I guess with all the new physics tech out there, I just demand more out of my games...
Commence flames....nnnnn-now!

5. I think if arcade games pushed the envelope again, like this one is doing, that arcades would make a comeback.

I really believe the reason the arcade failed is because you were eventually getting the same games at near the quality (or the same quality) of the arcade machines, and so there was no motivation to go out to the arcade any more, when you can play the same game at home.

Assuming that in game graphics do look like the screenshot shown, I don't think that any of the next gen consoles could do this, thus providing a good reason (excuse) to head out to the arcade again.

6. not bad... though it IS a fighting game (and they're known to look pretty good due to the limited number of characters on screen).

7. Hey IntellectualIdiot. You dont lie. You are an idiot.

"How sad... the deepest, most cognitive fighting series on the planet is a "90's thing""

Yes...like these guys say. This genre died when the arcade went away. You want to play a "deep, cogitive" fighting game? Try playing something realistic like Fight Night 3. A grown man (maybe you are...maybe you arent) should not be playing these games anymore...

8. fight night is not a real fighting game, only people who suck at fighting games would say something like that. ohh and i don't lie either.

9. Was actually pretty damn good at the best "fighting" game...Street Fighter. Fight Night is realistic. For you to use "deep and cognitive" for Virtua Fighter? Realistic is using swords and shooting magic. How fun...but especially how realistic. You must not be from the US to still be in love with these games...

10. Actually cage if that is you're real name, go to shoryuken.com, go to tekkenzaibatsu.com, or better yet go to evolution, the yearly tournament held in vegas, and you will see how not dead fighting games are, and by the way, fightnight although being a pretty game on the 360 is not in the same field as any of these games, it more of a sim game. VF will make millions thats why you see games such as tekken5 vf4 on the "greatest hits" list because they have sold so well. so really you are as my name would state and I am from houston texas. Who the hell said anything about realism anyway? I can watch a boxing match anyday, i can not however find a channel where a 9foot dude with an axe fights link! (sould calibur!)

11. To all the people whining about this, it's just the arcade form, who is to say it won't get polished up by the time it gets released on the PS3?

12. "Was actually pretty damn good at the best "fighting" game...Street Fighter. Fight Night is realistic. For you to use "deep and cognitive" for Virtua Fighter? Realistic is using swords and shooting magic. How fun...but especially how realistic. You must not be from the US to still be in love with these games..."

The retard that copied his name form a mortal kombat 2d, stilted fighter is commenting on this topic. How unusual for this cage retard to be on here critiscing what his trailer park dwelling family will never afford. Just be happy with your stolen gameboy advance, you window licking, dribbling retard cage. Your mother must be so proud that her retarded son can even type, let alone come up with a sentence that actually works (although does not make sense). Hope you don't like FPs shooters Cgae as they were dead after doom, hope you don't like platformers as they died after alex kidd, hope you don't like sports games as they died after I declared that soccor is for fags like beckham (thats why I have to go round & service posh, while beckham, george michael, elton john, julian cleary & cage are reaming out each other bottoms in gay orgies. By the way cage, tell your mum I found her buttplu in my car the oter night after I gave her a workout...... She maybe fat, but damn that b!tch sukks like an industrial strength hoover vacuum cleaner...Funny, beckham said the same thing about her son. See you did get some of her finer qualities retard.

We already knew this about you, retard. You have to be american don't you........ It is so easily pinpointed by your universal flaw of ignorance & stupidity on all subjects. Go wave your flag somewhere else retard, we know you americans are blinded by too much patriotism to see the forest through the trees & will slam japanese consoles & games over big dumb american consoles that cater to americans with big dumb american FPS's.

Virtual Fighter is just another reason why PS3 will be at the top of the food chain again. And the fact that tekken is exclusive along with Soul Calibre is just iceing on the cake....... So PS3 will get all these + fight night, the only fighter PS3 may not get is the baby pool of fighters, dead or alive, shallow, shallow, shallow.

I have a 360, & can safely say that it's done nothing yet to make me think otherwise about sony's dominance in the next gen as well. My 360 is a future ebay item....2-3mths max.

"If you don't like FPS, you are not a serious gamer."

"You must be immature if you like unrealistic fighters like Street Fighter or Virtua Fighter; but I'm a serious gamer (and an adult, mind you!) because I like a realistic 'fighter' (sic) like Fight Night Round 3"

And then he calls us immature, 12 year old idiots. Cage, what the hell are you doing on a PS3 website if most of the games that the PS3 will be either not FPS (the least innovative genre; oh, and guess what, it was also born in the nineties!), or the few FPS it gets will be cross-platform. As far as I know, only Killzone and Resistance are exclusive, and as for FN Round 3, it is also on 360. Everything FPS is on 360. Games for immature people, like single player games, such as Metal Gear Solid 4, Final Fantasy XIII, Devil May Cry 3, Virtua Fighter 5, Tekken 6, Soul Calibur 4, Ratchet & Clank, Lair, The Getaway 3, Dragon Quest 9, Kingdom Hearts 3, etcetera will all be on PS3, and most likely than not, exclusive. You don't like them of course, so why do you even bother, dipshit? If you are such a "serious gamer", then go to hell, or at least to "Xbox 360 fanboy", where "serious gamers" that don't play any of that "RPG, fighting, adventure, action, strategy, simulation" immature crap.

At least the fighting genre makers don't try to pretend they are delivering a new game by making "new IP" and calling it a "new game" as the FPS makers, such as Epic Games, think they are doing when actually recycling the same concept.